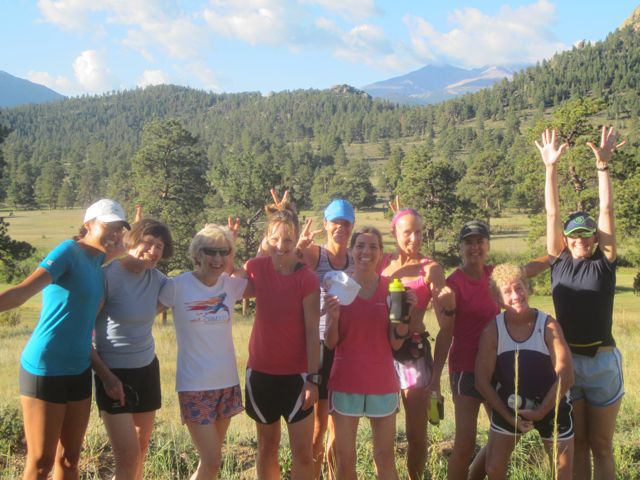 Moving to Colorado had been on our radar since 1998. We had driven into Colorado through four corners as part of a big family trip in 1998, checking out possible places in the US that could provide a future home for us.

I vividly recall the excitement that my wife Jacqueline and I felt as we drove into the Rocky Mountain state, and the wide eyed amazement at the scenery that was a sensory treat for our British eyes.

Fast forward to 2006, and we have packed in our corporate jobs back in England, sold our turn of the century miners cottage, and moved lock stock and barrel to Boulder, Colorado. Once we were there, and I was getting connected with the local running scene, we started running trails in the Boulder area. Arriving as a road runner, think mainly country lanes, it took no time at all to fall in love with the freedom and back to nature feel that trail running provides. I remember thinking, “why didn’t I know about this before?” I quickly made up for lost time, and explored every trail I could get my feet on. Our search for a home took us increasingly further away from Boulder, and we purchased our first mountain home in May 2006, in Estes Park, Colorado.

During the summer of 2006 I connected with the local trail and mountain running community in Estes. We quickly found a band of runners called the asylum group, so called because the local townsfolk think they are all crazy to run up and down the challenging mountain trails in Rocky Mountain National Park. One of my favorite runs became Black Canyon trail, that runs east from the Lumpy Ridge trail head, and forms part of the famous Lumpy Ridge loop. It meanders through amazing rock formations, aspen groves, and then opens out onto a rolling meadow with an incredible backdrop of Longs Peak and Mount Meeker that is just breathtaking.

I arranged a corporate planning retreat for Fleet Feet Sports in Boulder in the fall of 2006. The owners at that time, Jay Johnson and Kathy Hawk, wanted to spend time away from the store, and plan marketing and sales strategies for the year ahead. Our home provided a comfortable and quiet location, and the group arrived on a Friday evening ready to combine thoughts and plan away. Of course some running had to be involved, and they asked me where was a good place to run. I hadn’t yet run the whole Lumpy Ridge loop, so this seemed like a good opportunity to do so. Sunday morning dawned and we had several inches of fresh snow to greet us as we set out for the trail head. I set off with the three other guys, and really enjoyed that feeling of being the first to break trail, cruising through the first 2+ miles of the 10.5 mile round trip, and enjoying my first trail run in the snow!

The trail climbs pretty steeply up to the saddle that is the summit of Lumpy Ridge on the west side of the trail. The three other guys pulled ahead from me, and I found myself running solo in old growth forest in blissful, perfect peace, other than the crunch of my own footsteps. This was my first taste of the peace and tranquility that comes to those who explore the trails after a snow storm. I felt completely connected to the nature around me, my soul was singing, and I felt that I had returned to a home I had known long before. Once there was a crack of a piece of dead wood snapping under the weight of a passing animal. A moment of fear arrived, and then passed as I realized I felt safe in this forest, and that nothing would harm me. Once past the saddle, the trail winds down the descent on the north side of Lumpy Ridge, and links up with the Cow Creek trail. Somewhere along here I caught up with Jay Johnson, who was slowing in the deeper snow and slippery conditions. Now Jay is a legendary runner, being the first ever American gold medal winner at the World Mountain Running Championships in 1987, while also a very quiet, humble man. I kept pace with Jay for a while, swapping stories and just enjoying the beauty that snow adds to the meadows on the north side of the Ridge.

We started the climb up toward Gem Lake, and I tucked in behind Jay as the trail was very definitely single track at this point. It suddenly struck me that I couldn’t hear Jay’s breathing, and it dawned on me that he was just cruising up this climb that had me breathing hard! It was nearly 20 years since Jay had picked up that gold medal, and the respect I have for this incredible runner just mushroomed. Once we hit Gem Lake the trail sweeps downhill back to the trail head. I decided to press on from here, and left Jay and ran alone again, following the footprints of Matt and Rob ahead of me. I swooped down into the trail head, and met Matt at the end of a fantastic run. It was one of those runs that often happens on Colorado trails where time seems to stand still – in reality I had been out for over 2 hours, and yet it seemed like it had taken less than half that time. It was a run I would never forget, my first trail run on snowy trails!

Now, the Lumpy Ridge trail head has become a firm favorite for all of our trail running camps and women’s running camps that we hold here in Estes Park, Colorado. The Black Canyon trail is a great one to introduce newbies to running trails, and more experienced runners to start a Colorado trail run, and is often a place for picture memories to be created. It is also the start of the daily fun runs that take place during the US Trail Running Conference, that has it’s fifth year at the Stanley Hotel in Estes Park in 2017, October 11-14. You never quite know who you might meet on this trail. It is a firm favorite of seven time Western States 100 winner, Scott Jurek, as well as Joseph Gray (current World and US Mountain Running Champion), and Nancy Hobbs, (Chief Executive of the American Trail Running Association). 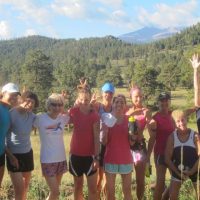 It’s been a long time!