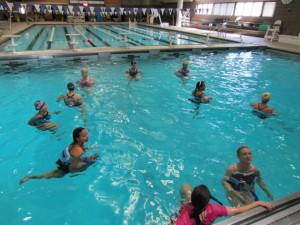 Pool running is a widely used technique, often for rehabilitation from injury. It doesn’t require anything expensive in the way of equipment – most aquatic centers have aqaua jogger belts, so you don’t even need to buy anything new. On with your swim cossie, fasten the belt on the aqua jogger flotation belt, and into the water you go..When I broke my femur earlier in 2013, pool running helped to keep me sane while I wasn’t allowed to impact the healing leg running on dry land. I had long considered that pool running, or aqua jogging as it’s often known, had many other benefits besides just the traditional rehab route.
I was introduced to pool running by my friend and ace coach, Bill Ruth. The most important part that I took away was the technique to use in the pool. The key objective is to mimic the biomechanics of running as closely as possible. The best way to do this is to use a high knee, A-step, perhaps much like you have used in drills or warm-up routines.

Bill has created a great video that demonstrates the technique really well. He also goes into explaining the variance in stride rate and how that impacts the specific energy system that a pool running session can impact. Rather than describe the technique to use, I will let Bill’s video expertly demonstrate.

I had long considered that pool running, or aqua jogging as it’s often known, had many other benefits besides just the traditional rehab route. During this year with the chance to run in the pool many times before I could get back to running, I had an opportunity to think about the many benefits that pool running can bring as part of a training program for runners, so here goes:

While you’re finding out about using your local aquatic center or pool, we encourage you to check out why you should be doing swimming workouts as well.

Active at Altitude provides personalized coaching, as well as women’s running camps, and trail running camps, both based in Estes Park, CO, and is the Official Training Partner for Vacation Races, who hold a series of 11 half marathons based at National parks around the US.
Contact Camp Director and Positive Running Coach Terry Chiplin.